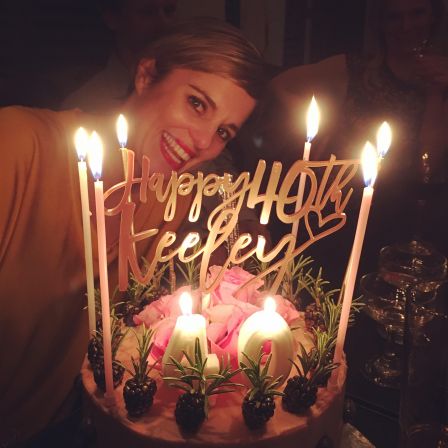 I mean what the hell, how did that happen?! I cannot be 40… I am no way near grown up enough, I still have to ask my mum about simple life tasks! But mostly I think the inevitable and most obvious thought enters your head first…wait I cannot be 40 and still not have a baby!

Half of my friends are well out the other side of having young children, and I haven’t even begun. It’s the old adage isn’t it, and it’s a terrible feeling, but I honestly just feel like we’ve been left behind. I always envisaged my friends and I’s kids playing together, hanging out at weekends, going on great holidays together and it all working because we all had kids the same age. At this rate, and all things being well, they’ll all be babysitting my kids! (but hey never look a gift horse in the mouth!).

I’ve seen this a lot recently actually, this concept of “being left behind”, and not always in relation to fertility. In a culture where we are constantly comparing our lives to others, I guess this feeling is inevitable, but it’s not good for us. I think there is a fine line between being ambitious in whatever sphere you want to apply that to, and being wholly aware of exactly where you are and what you actually need. A very smart cookie of a friend of mine, who is also a counsellor, said that actually decade birthdays (whichever they might be), are often times when we pause and reflect on where we are or aren’t, or thought we would be. Also, that as we age, we increasingly need to accept what we can’t control and just be ok with that, rather than fighting it. God, that couldn’t be truer than in fertility I think!

In relation to fertility though, the reality is that this is super hard. If you have made a conscious decision to not have children, then that is your prerogative, or have accepted that that is not your path in life, for whatever reason that might be, then I think it’s different. There is whole debate, which I’m not going to get into here, about the fact that some women are upset because they think having children is presumed to define you as a woman. They are absolutely right, it shouldn’t and it doesn’t, but for those of us who do want to be a mum, it absolutely does define us in every way, whether that’s right or wrong. However “strong” people think you are, or that indeed you believe yourself to be, when you can’t make something happen and that “something” is really your current identity, then that is, well it’s just sh*t.

I think the “being left behind” in fertility is just more evident as you get older, at least it feels like that to me and is my personal experience. Believe me, I’m not saying that you wouldn’t feel this at 26, and there may be a host of reasons why this would absolutely be relevant, dependent on everyone’s individual situation, but at 40 there are a shed load of other variables to consider. I don’t want this to sound negative, it’s just reality, and something you have to seriously consider. I guess that relates back to the “acceptance” of where you are and what you can’t change. Don’t get me wrong, there’s no giving up on this side, but the window for certain options is certainly getting smaller and that cannot be denied.

I’m 40! Aside from being classed as a geriatric mother since the day I started trying to conceive, now I’m categorically a dinosaur, barely capable of moving my zimmer frame through the clinic doors. I’m now in a completely different bracket, and even though I’ve been in the reduced fertility bracket for forever, now it will be the even sadder eyes that confront me every time I have to give my date of birth at my blood tests, and tick that tick box and it be reiterated to me, that “because of my age”, blah blah blah. OK, I know that I’m on another “drop off” stage, but I’m not out of the game yet!

I saw myself still leading a successful career in production and bossing it like any other ambitious member of the sisterhood out there, alongside juggling the pressures of motherhood… like all of my friends.

I saw myself with a 3year old and possibly one on the way (cos it’s that easy!)

I saw us finding cool “family friendly” holiday destinations and I saw our nephews and nieces playing with our kids and looking after their “younger cousins”.

I saw me celebrating this year with my mates, maybe on a cheeky trip to somewhere sunny, quaffing prosecco and gin and dancing till late at a fabulous party I organised! (some of which I am still doing, with or without prosecco!)
But as they say, you can’t change where you are, and now I have a different path. Doesn’t mean that someday the “dreamed” path and the real one won’t converge but there’s definitely a different narrative and likely a different ending, and hopefully I don’t mean in a bad way.

So being 40 means different things for me now.

It means my fertility journey is still very much ongoing, in fact it’s entered into another phase. Another avenue of myriad options and decisions.

It means that there isn’t an awful lot to celebrate, that sounds awfully morose but I just mean not in the way I thought and hoped ie pregnant or with a young bubba. Fear not, I will still be celebrating, would be rude not to, it will just be without the f*ck off party (that’s for next year when all of these hopes have come true obviously!)

It means that I have been married to the love of my life and my absolute hero for nearly five years, and I am thankful for that everyday. I’m hoping by the time he is 40, I can give him the best birthday present ever! (Toyboy! haha he’s probably regretting the older woman choice now;)

It means I still don’t know when my “career break” will be over, but I accept that the decisions we have made have been for the right reasons and I still believe cultivating a better “self care” environment has only been a good thing.

It means that I cherish my family and my friends (and their kids) more than ever, I’m pretty damn lucky, they are awesome.

I take nothing for granted and I firmly believe that 41 will be the new 40!

Next year is my year to celebrate this milestone and converge those paths and tell a new story.

So bring on the celebrations, hand me that glass of fizz and let’s kick 40 into touch (for now).

Photo Credit: Alice Tonge (she has always been my personal photographer;)))

My name is Keeley,  a 39 year old Producer, who lives in East London with her gorgeous husband, aka Dwighty.

I decided to write this blog not only to help me work through this strange, confusing, and hopefully exciting period in my life, but also in the hope that by sharing my experiences I might help someone else feel something positive, and hey that’s not bad right? x