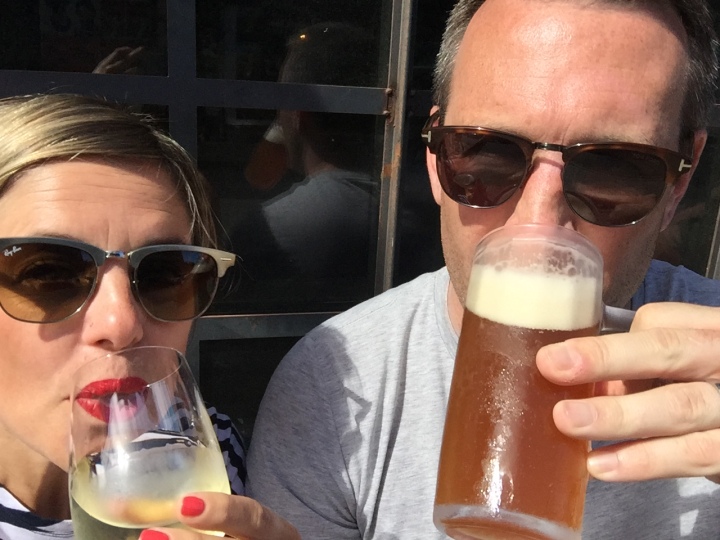 Even though the end game is clearly the best incentive ever at the moment to being tee total, it doesn’t make it necessarily any easier. Our social lives in part have always revolved around finding the next fantastic restaurant or bar, enjoying great food and the drinks that go with it (who doesn’t love a tasting menu with some fabulous wine pairings?!?). So I think when you make a conscious decision to curb the yearnings for a lovely pinot noir or a pint of IPA, you tend to remove yourselves from social situations, ie remove the temptation, or at least we do. It makes us sound ridiculously dependent, and that’s not it at all, because actually not drinking is bloody marvellous, but it does make you rethink how you behave in those situations or indeed how you want to feel.

Ironically, our first and only pregnancy to date, we think was fuelled by a weekend of Pinxtos and fine wine in San Sebastian, but I know, and indeed consultants the breadth of London have told us, that low alcohol intake is mandatory (which equates to zero for me, due to astonishing lack of willpower!) Which is pretty annoying when everyone you know basically got pregnant the night they went on their biggest bender of the year… that’s what everyone says… just relax, have a drink, don’t worry too much about it. But I do, and so why risk it. I also think because I know, or at least I’m told, that elements of my natural killer cells can be high, then my rational thought is, why put more “alien” things in my body for my body to fight, if it’s already trying to fight to keep this little thing viable (ugh that’s an ugly word, but one that is used a lot in fertility!).

I know we should all probably be those people who can enjoy a good social occasion without the need for alcohol, but unlike the current generation of 18+yr olds who eschew a pint for an hour in the gym, that’s just how my peer group grew up, and we had a bloody good time doing it. However, as my friends and I enter our early 40s, it’s become more apparent to me that that’s exactly what people need these days. Maybe it’s because we don’t see our friends as much as we did when we were all out every weekend. Perhaps it’s because what everyone feels like they need, actually more like deserve, is a nice couple of glasses to wash away the week, or to remove themselves from the argument ensuing between their 6yr and 4yr olds. I definitely know that stress plays a part and makes these decisions easier for all of us, plus the fact that having a few drinks is really good fun! By the way, I’m not saying it’s the answer by any stretch of the imagination; there are things that definitely do NOT need addressing through alcohol or dependency of any description, but we wouldn’t be honest if we didn’t say it feels like it helps now and again! What’s been really interesting is that a lot of my friends, who would always usually turn to a glass or five to decompress from stressful situations, have realised that actually it just serves to fuel whatever current anxiety is top of the list, rather than making them feel better. Clearly that is a symptom of alcohol, but one that is a little hard to admit, let alone accept!:)

Mine is less a need, than I just really enjoy a glass or two (in the loosest sense), always have done! I love the taste of a glass of fine white wine, or a scrumptious G&T, and all their variations and current pretentions. We also all know it gives us a little more confidence or a sense of ease, and that’s ok in my books, but as they say all in moderation.
However, it is curious to admit that at the moment, it’s just really hard being the non- drinking ones in a crowd. Friends and I, and indeed Dwighty and I, have always enjoyed debriefing over some G&Ts or a few beers in the pub, or putting the world to rights over dinner in the company of a sumptuous red. It used to be, right or wrong, the way that I decompressed after a long week in advertising (and usually mid week too!). I always knew that the right thing to do after a long week would be to have a relaxing weekend, but inevitably that relaxation centred around a night out with friends, and a Sunday roast in the pub with a couple of bottles of red! I’m not saying this is true of everybody, I just think that most of my peer group, friends and family would say the same.

I think what I’m learning at the moment, is that you still have to put yourself out there, sober in a land of merriness, and the more you do it, the easier it gets and the better you feel. Weekends have become markedly longer, and active! Long walks in the forest on a Saturday or Sunday morning, have taken the place of watching Saturday Kitchen and Sunday Brunch for hours on end with a hangover, and we bloody love it. Don’t get me wrong, 10pm I’m out of that pub. As the rest of the party descend into slightly more than tipsy, my patience levels start to reduce slightly, and as we all know a boozy conversation operates on a different plane to most.

Some might say, well wait till your pregnant and then you’ll know what missing a drink feels like. But to be honest, then I’ll be pregnant and the last thing I will care about is a drink, as it will be the thing we’ve always wanted, and the reason we have put our “good living” on hold. Hey, not going to lie and say I won’t really be looking forward to some bubbles at the end of it!

Reading this back, makes me sound like some obsessed lush! Haha back in the day I probably was, not obsessed, but definitely a lush (in a good way), but I make no apologies for that. However, I know having changed our lifestyle, it has definitely contributed positively to the process we are in, and that I am pretty confident about.

As they say, the rollercoaster of fertility drives you to different emotions, and ironically when something doesn’t go your way, all you want to do is have a bloody great big drink! 🙂

My name is Keeley,  a 39 year old Producer, who lives in East London with her gorgeous husband, aka Dwighty.

I decided to write this blog not only to help me work through this strange, confusing, and hopefully exciting period in my life, but also in the hope that by sharing my experiences I might help someone else feel something positive, and hey that’s not bad right? x